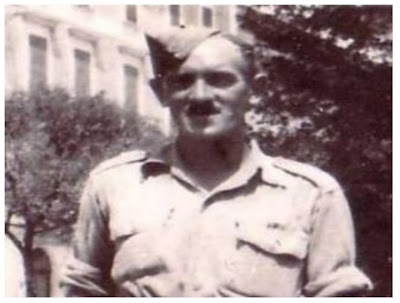 George attended Belfast Royal Academy and then gained employment with the Ulster Bank.  He was posted to Westport branch, Co.Mayo to work and was later transferred to Dungannon branch.

On 14th June 1940, George volunteered and enlisted into the Royal Artillery into a light/heavy anti-aircraft role.

Further information on George can be obtained from this website, Remembrance NI Org.

The book, 'The Ulster Bank Story' by Lyn Gallagher mentions a George Johston on page 50.  He was the manager of Clones branch.
Posted by Gavin Bamford at 7:51 pm No comments:

We Will Remember Them 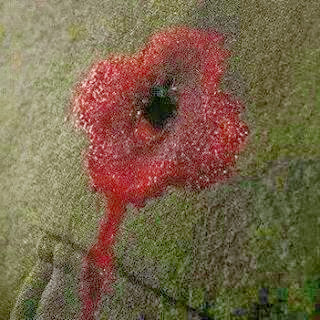 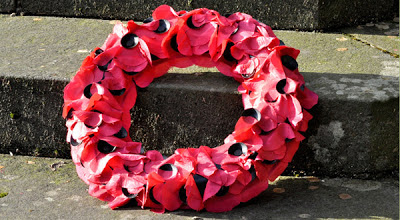 The following section of text is taken from 'The Ulster Bank Story' by Lyn Gallagher.

"It is unnecessary for us to stress the seriousness of the position in which the Nation is now placed.  Great sacrifices will unquestionably be required from every one of us and we are sure the members of our Staff will do their best to help us to carry on the the work of the Bank successfully through the trying times which lie before us".

With proud thanksgiving, a mother for her children,
England mourns for her dead across the sea.
Flesh of her flesh they were, spirit of spirit,
Fallen in the cause of the free.

Solemn the drums thrill: Death august and royal
Sings sorrow up into immortal spheres.
There is music in the midst of desolation
And a glory that shines upon our tears.

They went with songs to the battle, they were young,
Straight of limb, true of eye, steady and aglow.
They were staunch to the end against odds uncounted,
They fell with their faces to the foe.

They shall grow not old, as we that are left grow old;
Age shall not weary them, nor the years condemn.
At the going down of the sun and in the morning
We will remember them.

They mingle not with laughing comrades again;
They sit no more at familiar tables of home;
They have no lot in our labour of the day-time;
They sleep beyond England's foam.

But where our desires are and our hopes profound,
Felt as a well-spring that is hidden from sight,
To the innermost heart of their own land they are known
As the stars are known to the Night;

Posted by Gavin Bamford at 12:10 am No comments:

Posted by Gavin Bamford at 11:36 am No comments:

Following on from the success of my Northern Bank War Memorials website, I have decided to undertake similar research on the Ulster Bank officials who served in World War II.

After the sale of the Ulster Bank Head Office in Waring Street, Belfast, the following important pieces of Ulster Bank Heritage were re-installed in a new location on walls in the staff entrance to the new Ulster Bank building in Donegall Square East, Belfast:

These memorials, consisting of Bronze plaques feature those officials from the bank who served, went missing in action, died or were killed in either of the two conflicts.

The opportunity is being taken now to catalogue the information thereon and make that information public.

Of the 120 men who volunteered and enlisted, 12 were reported as killed in action.

I had considered undertaking research and presenting on the Great War men who served. It is with much pleasure that I commend the new RBS website - RBS Remembers 1914 - 1918 .

I trust that you will find my site both interesting and informative.

gavinbamford
Posted by Gavin Bamford at 7:34 pm No comments:

Email ThisBlogThis!Share to TwitterShare to FacebookShare to Pinterest
Labels: Introduction

The Royal British Legion have announced a scheme by which WW2 veterans can apply for funding to attend a commemoration event in London over the weekend of 8th to 10th May 2015.

".... The Royal British Legion will join the nation in marking the 70th anniversary of Victory in Europe (VE) Day over the weekend of 8-10 May.  A series of national commemorative events will take place in London, and community events and celebrations are being organised across the country.

The Second World War generation will be at the heart of all activity and, as part of this, the Legion is now making a call out to veterans of VE Day, who would like to take part in the national commemorations in London.

To ensure representation across all those who played an active role during the Second World War, the invitation is for those who served in the military, the Home Guard or in any one of the reserved occupations, including medics, police and the 'Bevan Boys'.

Posted by Gavin Bamford at 9:00 am No comments:

There were 21 bank officials with surnames beginning with the letters R to Z who served in WWII and returned home.

Their mini-biographies have been started using information from the following sources:
and other internet web sources detailed in the individual articles.

This was a difficult exercise with many men having only generic information about them i.e. possible year of birth and the fact that they joined the Ulster Bank following their education.

Each man has had an individual 'post' created about them. This means that they will appear in future internet searches and give relatives, descendants and interested parties a basic start to their research. It is hoped that contact will then be made with myself to enable updates to be made.

Thank you.
Posted by Gavin Bamford at 12:10 am No comments:

Please assist me by emailing gavinbamford@btinternet.com with any information that you would have on this Ulster Bank official.

Please assist me by emailing gavinbamford@btinternet.com with any information that you would have on this Ulster Bank official.

The Forces War Record website records a J H S Withrington as saerving in the Royal Inniskilling Fusiliers in 1944 as a 2nd Lieutenant.

The London Gazette of 19th May 1944 records a John Henry Scott Withrington (service number 14408775) being promoted to 2nd Lieutenant with service number 312437.

The Ulster Bank Story by Lyn Gallagher records a George Withrington (on page 251) as being a member of staff of the College Green branch in 1890 (photo also in book).  George eventually became manager of that branch.

The 1911 Irish Census records a Thomas Richard Withrington (aged 36) as a bank official boarding in house 28, Hawkins Street, Londonderry.  He is eventually to become manager of the Ulster Bank, Londonderry.

George is not recorded in the 1911 Irish Census.

The 1901 Irish Census does not record any instances of Withrington.

Posted by Gavin Bamford at 12:10 am No comments:

The Forces War Record website records a T V Wallace serving in the Black Watch (Royal Highlanders) as a Private in 1945.

The Belfast City Counicil website records a Thomas Victor Wallace of 1 Marmont Crescent as dying on 1st July 1962 aged 49 (giving a birth year of 1913).  His parents were Jeremiah Thomas Wallace and Elizabeth Wallace.
Posted by Gavin Bamford at 12:10 am No comments: 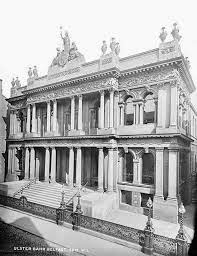